All About Slot Machines


Originally, casinos installed slot machines as a diversion for casual gamers. Unlike traditional table games (such as blackjack or craps), slot machines don't require any gambling knowledge, and anyone can get in the game with a very small bet. 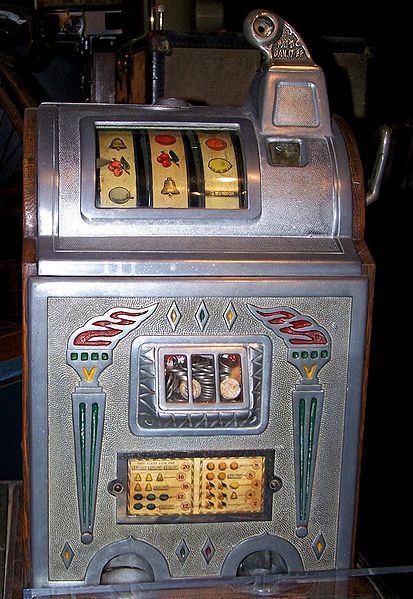 This idea proved to be a monstrous success -- slot machines eventually moved off the sidelines to become the most popular and the most profitable game in town, bringing in more than 60 percent of the annual gaming profits in the United States.

The technology of slot machines (known as a Fruit Machines in the UK) has also changed a lot over the years. The classic mechanical designs have been almost completely replaced by electronic slot machines and slot machine software. But the game has remained the same. The player pulls a handle to rotate a series of reels (typically three) that have pictures printed on them. Winning or losing is determined by which pictures line up with the pay line, a line in the middle of a viewing window. If each reel shows the same winning picture along the pay line, you win (certain single images are sometimes winners as well). The amount you win -- the payout -- depends on which pictures land along the pay line.

The classic mechanical slot machine design works on an elaborate configuration of gears and levers. The central element is a metal shaft, which supports the reels. This shaft is connected to a handle mechanism that gets things moving. A braking system brings the spinning reels to a stop, and sensors communicate the position of the reels to the payout system. A coin detector initially registers that a coin has been inserted and unlocks a brake so the handle can move.

There are any number of ways to arrange these elements, and manufacturers have tried dozens of approaches over the years. The basic design includes three reels mounted on a central shaft. The central shaft of a Slot Machine also supports three notched discs, which are connected to the three reels. A second shaft below the central shaft supports a kicker, a piece of metal comprising three paddles. The kicker paddles are lined up so they can push against the notches on the three discs. The second shaft also supports a series of connected stoppers, teeth that lock into the notches on the discs.

AllJ Software provides completely configurable slot machine software for Windows 7,8,10 that allows you to customize your reels (with custom imagery and frequency), pay rates, odds, and comes ready to integrate with coin/token hoppers and coin/token processors (works with almost all coin and token hoppers internationally).

We've attempted to digitally simulate reel action, appearance and sounds of a real slot machine, while providing tools that will allow you to customize all of these elements to more closely meet your slot machine software needs.

AllJ Slots
"...The most comprehensive slot machine software I've seen out there... The most control over odds, imagery and overall experience that I've seen!..."  -K.P. Baker, Biznet Marketing Services